The Moors at Arne: Heritage and Archaeology

What have we done to Investigate the heritage of the site?

The first work was to investigate what was already known about the site, by looking at existing archaeological and historical records. Although very little was recorded within the site, from this research we could see that there had been activity in this area of Poole Harbour from the early prehistoric periods through to modern times. In particular, there was evidence of significant salt and pottery production in the later Iron Age and Roman periods, including an area of possible Roman pottery production just outside the site. Historical information suggested the Moors at Arne had been owned by Shaftesbury Abbey in the medieval period and had later been a focus for coastal defence during World War 2. The results of our findings were incorporated into what is called an Archaeological Desk Based Assessment which was written by Atkins, the project consultants.

Wessex Archaeology, the project archaeological contractors, then carried out a program of fieldwork investigations, starting with Geophysical Surveys. These were to identify signal anomalies below the ground that may represent buried archaeological remains. They also carried out a form of survey called electro-magnetic conductivity, which is good for mapping different geological deposits, especially peat deposits, which we knew were extensive across the site. These surveys identified a couple areas of potential archaeological remains, as well as an understanding of buried channels and islands across the site.

Combined with geotechnical ground investigations to identify the different ‘soils’ across the site that could be used for the embankment construction, geo-archaeologists examined borehole samples to better understand the way the site had formed geologically. Samples were dated through Radio-carbon dating, and analysed to identify plant fossil remains to provide an understanding of past vegetation. The data and interpretation has been used to produce a Geo-archaeological Deposit Model.

The most significant type of fieldwork investigation was the excavation of 303 trial trenches across the site, targeted at the results of the geophysical surveys, the deposit model and our proposed construction impact. These trenches were dug to identify buried archaeological remains and former land surfaces. The results have been presented in an Evaluation Excavation Report.

What have our investigations found?

The borehole findings showed that the site had formed in the Pleistocene period when fluvial sands were deposited and then partly eroded by further high energy fluvial action from a developing braided river system. The channels and hollows left by this erosion were then inundated by water and colonised by marsh environment plants, such as reeds, which slowly formed peat deposits; the earliest forming in c. 10,000BC, and with some areas still forming in the Roman period (c.100AD); interspersed within these peat marsh areas were higher areas of surviving fluvial sands forming islands and ridges of dry ground. Some of these dryer areas were a focus for human activity. The samples also showed the landscape and environment of the site had changed on several occasions in the past, heavily influenced by both sea level rises and climate change. At the end of the glacial period, the landscape was covered with a birch dominated woodland replaced by a pine woodland around a small area of reed marsh, which by c. 8500BC had given way to a scattered broadleaf woodland, around areas of reed marshes. Around 600bc larger areas of reed marsh formed in response to an increase in rising sea levels. By the Roman period most of this woodland had either been cleared or died away due to rising water levels and forming the landscape we see today.

Wessex Archaeology have created a series of reconstructions of what these different phases of landscape change may have looked like. 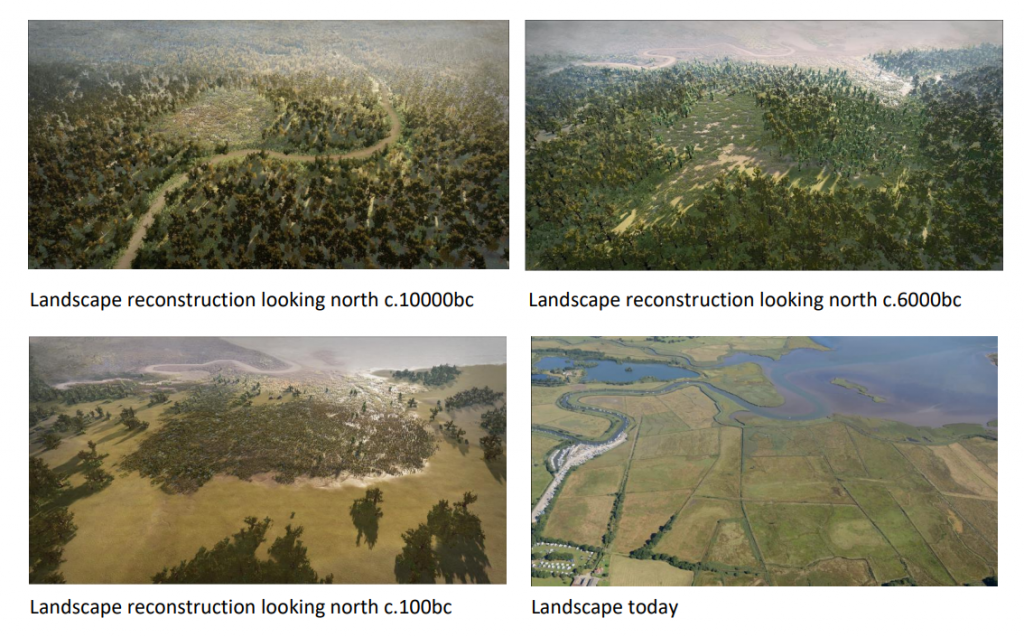 The trial trench investigations found three main areas of past human activity. The earliest was focused on a small sand island in the northeast corner of the site, where from the middle Iron Age (c. 500BC) through into the Roman period (c. 200AD) it appeared salt had been produced, as well as possibly pottery. Around the edge of the island, we found evidence of peat cutting, which may have been the fuel used for the salt and pottery production.

In another area of the site, set on a low narrow sandy ridge, we found evidence of possible occupation in the form of several ring ditches, thought to represent the water drainage gullies around circular huts. Associated with these ring ditches were a series of linear ditches and gullies which might represent boundary sub[1]divisions within the settlement or drainage of the occupation area. We found very few artefacts, but those that were recovered suggest the site was used in the later Iron Age and was possibly seasonal.

Our third area of evidence of human activity was at the southern edge of the site, where we found a large number of drainage ditches. These appear to be constructed around 200 years ago and were presumably an attempt to drain areas of the site for better grazing

What will we do further in relation to these finds?

The discovery of these finds provides us with a fantastic opportunity to further investigate climate change in the prehistoric period, as well as late Iron Age and Roman activity around Poole Harbour. If planning permission is granted for our project, we intend to carry out further archaeological excavation and recording to learn even more about these sites and their history ahead of the construction activities taking place on site. We hope that as part of this archaeological investigation there will be opportunities for people to visit and see what we are finding.